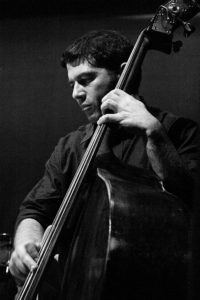 Graziano Brufani graduated in double bass at the Conservatory of Music “F. Morlacchi” in Perugia with the highest marks. He is a musician who since the early ’90s has carried out an intense concert activity.

From 1990 to 2007 he was double bass in a row and first double bass of the Orchestra Sinfonica di Perugia e dell’Umbria; with the Chamber Orchestra “Symphonia Perusina” he played in Italy, France, Portugal, Turkey, Egypt; with Luis Bacalov and Hector Ulises Passarella he gave concerts in Italy and Uruguay on the occasion of the World Tango Festival.
Always passionate about jazz music, in 2008/2010 he graduated from the International Jazz Master in Improvisation Techniques at the National Jazz Academy of Siena studying with musicians such as Eddie Gomez, Rufus Reid, Furio di Castri, Enrico Rava, Anders Jormin, Riccardo del Fra, Adam Nussbaum, Jeff Ballard. Frank Marocco, Richard Galliano, Nico Gori, Mauro Ottolini, Davide Ghidoni, Roberto Pistolesi, Luca Pecchia, Stefano Zavattoni, are just some of the musicians with whom he actively collaborates.

As an electric bass player and double bass player, he took part in various television programmes (“Nel nome del cuore” Rai 1, “La vita in diretta” Rai 2, “Tappeto volante” Tmc) and recorded for the cinema: “Tu la conosci Claudia?” comedy with Aldo, Giovanni and Giacomo; “I moschettieri del re” by Giovanni Veronesi; “La provinciale” Rai fiction with Sabrina Ferilli.
His many years of experience in teaching led him to create this audio/video method for double bass entitled ‘Round Double Bass.

He published the video course with Galeno Editore:

Go to the page "special ebook" to look into the ebooks and to equip your PC, your tablet or your smartphone to the ebook reader best suited to your needs